As Autumn gives way to Winter and the nights grow longer and darker, an ancient garden in the south of England transforms into an enchanted display of lights.

Leonardslee Illuminated is a magical illuminated light trail with an array of fairy lights, spectacular light installations, and entertaining multimedia performances. The grounds are home to giant luminous flowers, mythical animals and talkative forest fairies. In the heart of the garden, you’ll also find 3 inflatables born and made at our very own Brno factory. They are the Moon, Earth and star.

How did it all begin?

Leonardslee approached us back in 2020. More precisely, our English partner Kubicek Balloons UK. It’s thanks to Doug that we’ve sent dozens of inflatables of all shapes and sizes across the pond. At the end of 2020, Leonardslee was having trouble with another manufacturer’s inflatable. They turned to us for help and support. That resulted in years of cooperation and 3 Brno inflatables becoming a part of the enchanted winter trail.

Our first inflatable at Leonardslee Illuminated

Our first and premier inflatable quickly became the most photographed attraction at the festival. The 7m moon majestically floats a few meters above the lake. This is made possible by two steel ropes, by which it’s suspended throughout the event. The built-in RGB lights change the color and intensity of the lighting, so the ambience surrounding the moon is ever-changing, making your visit different and unique every single time.

A year later, our 7m Earth became the hot new thing at Leonardslee Illuminated. The model was not only admired by festival visitors, but also gained the attention of the media. And since it is our most popular model, you can encounter it all over Europe — Slovakia, Slovenia, Germany, Switzerland, Romania, and even Dubai.

A Star is Born at Leonardslee

The theme od this year’s festival will most likely ring a bell. However! “A Star Is Born” was not inspired by the film starring Lady Gaga, but by our newest and biggest inflatable. The 8m star has, like its predecessors, built-in lights with color control. The surrounding ambience can thus change in a single second.

We’re happy to say that you can expect a brand new Kubíček inflatable to join the spectacular trio! What will it be? Well, you’ll just have to wait and see 😊

How long does it take to make?

The production of inflatables is fast and the customer usually receives their desired model within just a few weeks. What’s more, with good handling, the inflatable will last you years and years. For example, some of our inflatables out there have been serving their purpose for over 16 years.

Out of all our models for Leonardslee, the most time-consuming was the Moon. Whilst swallowing 140bm (running meters) of fabric, production itself took 52 hours. Our skilled and smiley Jirka took charge of data processing and technical construction, and he was done within 10 hours. Fabric cutting took another 10 hours and it took our seamstresses a total of 22 hours to sew. The remaining time was spent installing the lights.

Our star was the quickest. She was born within 32 hours, including technical preparation, cutting and sewing 💪 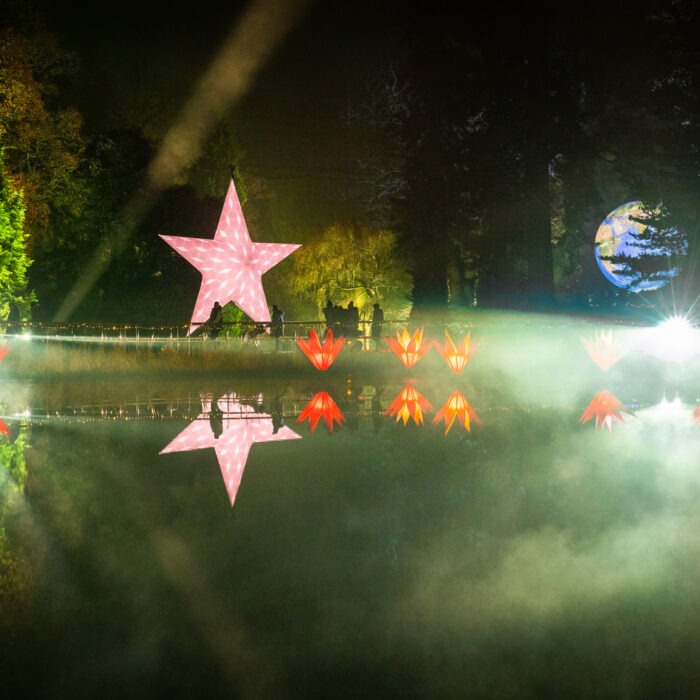 As Autumn gives way to Winter and the nights grow longer and darker, an ancient garden in the south of England transforms into an enchanted display of lights.

Did you know that along with inflatables, we also offer advertising banners prepared and printed directly at Kubíček Visionair? 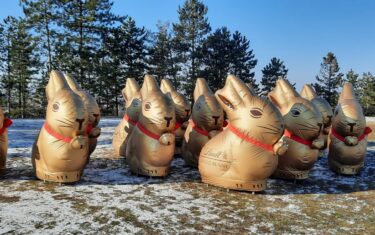 A group of giant golden bunnies has be seen in the Kubíček meadow. This cute little group will be heading for warmer regions!